Last night I decided to finally get around to making that homemade somoa cookie recipe, since I didn’t have the black beans I needed for another cookie recipe. Let’s just say I’ll be leaving the cookie-making to the Girl Scouts…or whomever manufactures those bad boys.

It all started out fine. I got the dough mixed up and ready to go, but started going downhill when I found myself skipping steps and combining things that weren’t to be mixed. The first step I skipped was the cooling of the dough. I started the process around 7, so I figured, “Hey, who has time for an hour in the fridge? Not me.” I proceeded to roll the dough out for cutting and quickly realized it was too warm. After I scraped the last glob from my elbow, I decided to just shape these cookies the old fashioned way. No biggie, right? It’s just a shape. After I popped them in the oven, it was time to toast the coconut. Again, trying to save time, I decided to do it at the same time the cookies were baking. What I failed to realize was that I was going to have to open the oven constantly to stir the coconut, thus thwarting the cookies from being cooked thoroughly.

After I got everything out of the oven, it was time to screw up the recipe one more time. I spent the next 10 minutes developing carpal tunnel syndrome by performing the tedious chore of unwrapping each caramel from it’s plastic wrap. I then proceeded to melt the caramels in the same bowl as the chocolate and mix it all together. Albeit not a terrible decision, but definitely a difficult mixture to stir. I finally realized that I had royally mucked everything up and decided to just wing it. I started smearing the caramel/chocolate/coconut mixture onto the cookies and finished by spreading them out to cool. They looked like poop and weighed about 3lbs each. Seriously the heaviest cookies I’ve ever lifted. I rolled the remaining topping mixture into little balls, which looked even more like poo. Beauty be damned; the things were delicious!

So now that I’ve scratched that off my Pinterest list, I can say with the utmost confidence that I won’t be trying that recipe again. Well, maybe next time I’ll have a second party to help keep my head on straight. 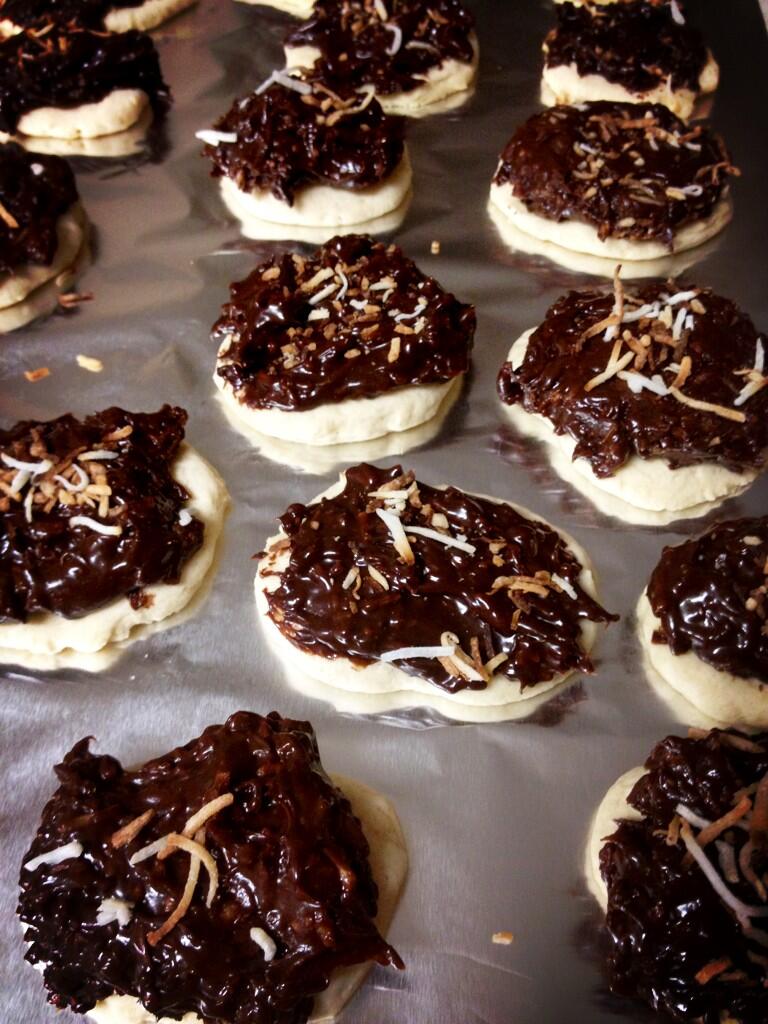 My Cooking Tip of the Day: Allow yourself plenty of time to follow a recipe through from start to finish. Baking late at night is not a great idea.